You are here: Home / baby / A Dads Dilemma

If you are putting babies to bed, you might want to save this for later.

I bring my kids out Saturday mornings (at 730) so my wife can have a break. I had both kids with me. 7 month old on my back, in a wrap, toddler was free range. My daughter asked to go for breakfast at McDonalds, she wanted pancakes(and a toy) After breakfast she was playing in the play place. Suddenly it was quiet, suspecting the worst, I asked “Nadia…are you pooping?”. She replied ” No. NONONONONO. CLEAN PANTIES.”. She had indeed pooped in her panties and hid in the upper levels of the play place. (No poop managed to escape containment thankfully). She wouldn’t let me carry her to the bathroom. She insisted on doing the walk of shame across the restaurant, like a sumo wrestler. I’m sure everyone knew what deadly payload she was carrying.

When we arrived at the change table …I made a most unpleasant discovery. The toddler had removed the container of wipes from my man satchel. I only had 3 wipes remaining to deal with an epic 3 day punani deep poonami. Complete with corn. My toddler was livid, consequently she would not stop kicking her legs or screaming. As you can imagine, panties loaded with corn chowder and flailing legs don’t particularly jive.
Before being a parent, I’d often wonder how poop (or other bodily substances) would end up on public bathroom mirrors. I’d always assumed it was some sort of depraved animal or someone mentally unstable. I now have an answer to that unfortunate question. It’s Toddlers. It’s always toddlers.

After using two wipes to contain the disaster, I had to finish the job with single ply TP. Obviously not up to the task, messy fingers were inevitable. As I was transferring the used toilet paper to the toilet, the tails of my wrap went into the bowl. Panic!. Previously sleeping (and mostly forgotten) infant startles awake and spits soother out. Ting. Sploosh. Rim shot followed by a dunk. Another soother abandoned to a watery grave. At least my tails were dry. I used the final wipe to finish her bum and attempted to clean the mirror (rather unsuccessfully I might add) . Sorry McDonalds. I gave it a valiant effort. I really did. Sorry about the smear. I guess sometimes shit happens.  When it came time to dress my daughter, I made a second discovery. My dear daughter had also removed her spare set of panties from my man bag. Thankfully she had not removed her change of pants. Leggings actually.
I’m not normally one to condone donning leggings without proper accoutrements, but desperate times call for desperate measures. My daughter rocked those leggings commando style.

I really hope someone less fortunate than me does not go treasure hunting, as they’ll find a surprise they weren’t bargaining for. This daddy doesn’t carry a wetbag, consequently soiled undergarments were relegated to the bin.
The rest of the outing went off without a hitch. I got my hair cut with 2 kids in tow and my wife got to sleep in until 11a. All in all, it was a good day. I hope next Saturday our outing is less dramatic. Next week I will check my bag before I leave. 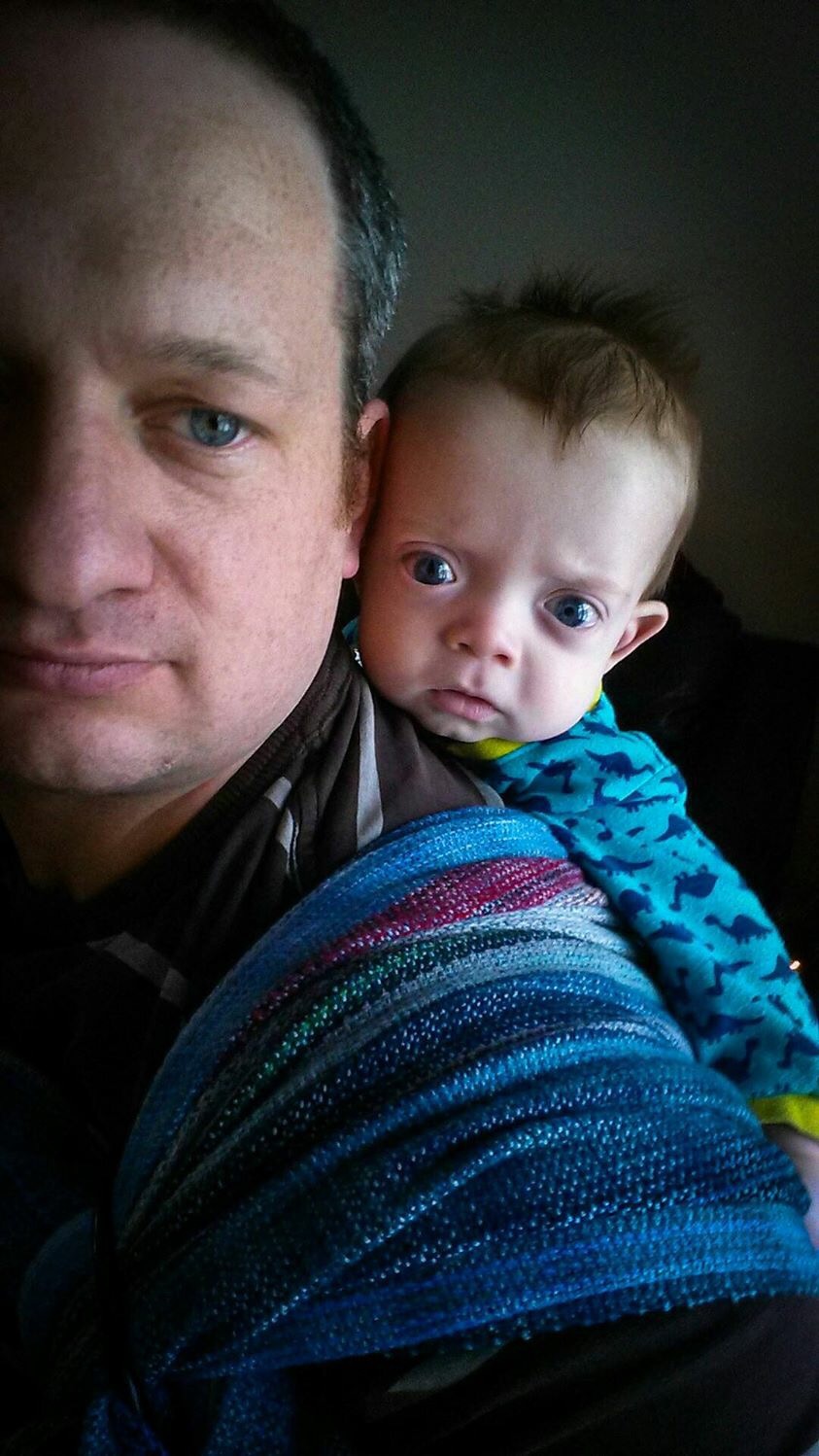 Written by Tim Tanguay a babywearing dad of 2 who works as a commercial and industrial refrigeration mechanic.